The Sufferings of the People Called Quakers

A book was published in London in 1753 entitled A Collection of the Sufferings of the People called Quakers: for the Testimony of a Good Conscience from The Time of their being first distinguished by that Name in the Year 1650 to the Time of the Act commonly called the Act of Toleration granted to Protestant Dissenters in the first Year of the reign of King William the Third and Queen Mary in the year 1689, compiled by Joseph Besse (1683?-1757), published in George Yard on Lombard Street, London by Luke Hinde. This book tells of the persecutions undergone by the members of the Religious Society of Friends, also known by their detractors as Quakers, at the hands of the officials and priests of England, Wales, Scotland, Ireland and some overseas countries.

The full details can be seen in the file suffer.rtf, which can be displayed in your word processor, and downloaded for later study.

In the introduction to this book, Mr. Besse gives the eight principal reasons why the Friends were persecuted. I thought it worthwhile to transcribe the text of these reasons for this page. These reasons were based on their reading and understanding of Scripture, and their understanding of the nature of the Christian church in its early days. The transcription follows:

This General Plea, the persecuted People, here treated of, have constantly, and as reasonably as any, insisted on, in Justification of themselves, and of that practical Dissent from Opinions and Customs in Religion, which though generally received, appeared to them inconsistent with the Truth, the Doctrine of which is firm and immutable, and which, though popular Prejudices and human Laws may sometimes contradict, they can never alter.

The principal Points wherein the Conscientious Nonconformity rendered them obnoxious to the Penalties of the Law, were,

I. Their Refusal to pay Tithes, which they esteemed a Jewish Ceremony abrogated by the Coming of Christ. They also considered, that the Levitical Priesthood, which took Tithes, being changed, a Change also of the Law which enjoined the Payment of them did necessarily follow: And that there being no Precept either of Christ or his Apostles, enjoining them to be paid under the Gospel, his Disciples are totally freed from all Obligation thereunto, and that it was a Christian Duty in them to stand fast in that Liberty wherewith Christ had made them free, and to be no more entangled with the Yoke of Bondage.

II. Their Refusal to pay Rates or Assessments for building and repairing Houses, or Places, appropriated to the Exercise of such a Worship as they did not approve of, the pretended Consecration of which Places, they looked upon as an unwarrantable Superstition, they also considered the said Assessments as applied to many other unscriptural Uses and Impositions, which they could not, with a good Conscience, contribute to the Support and Maintenance of.
III. Their constant Obedience to the Precept of Christ, Swear not at all, which they would not in any Case transgress: For they did not believe, that any human Law or Power upon Earth could justify them in known Breach of a positive Command, such as they esteemed that of our Saviour to be in Respect of Swearing. In this Point they were acted by an invincible Constancy, and supported steadfast in the Faith, through Bonds, Imprisonments, Banishments, and even Death itself.

IV. Their Disuse of the Custom of uncovering their Heads, or pulling off their Hats, by way of Homage to Men, which they accounted an undue and unscriptural Respect of Persons, and a Misapplication of that outward Signification of Honor and Address which they appropriated to God only. This Custom had not the Sanction of any written Law; yet the Omission of it was deemed a Contempt, and frequently punished by Fines and Imprisonment.

V. Their Christian Resolution of assembling publickly for the Worship of God, in such Manner as was most agreeable to their Consciences, from which nothing could deter them; and in which they stood much exposed to the Malice of their Adversaries, who always knew where to find them. In this they manifested an Intrepidity, sometimes astonishing, even to those who came to their Meetings on purpose to molest them.

VI. The Necessity many of them found themselves under of publishing the Doctrine of Truth which they were persuaded of, and of reproving Vice and Immorality openly in the Streets and Markets, and sometimes even in the Places appointed for the publick national Worship. From the worst of those whom they so reproved, they met with ungrateful Returns of manifold and barbarous Abuses, which were too often encouraged by Authority of the Magistrates, who ought to have restrained them.

VII. Their refusing to make Use of the established Priests or Ministers, either in Marrying, Burying, or any other Case, and conscientiously withholding the Fees customarily paid on those Occasions. Hence proceeded many Prosecutions against them, especially in the Ecclesiastical Courts, where they generally issued in Excommunications, the Consequences of which often were Imprisonments on Writs de Excommunicato capiendo, during the Pleasure of Holy Church. By this Means many of this People were buried alive, and became Sacrifices to the Interest of domineering Ecclesiasticks, in Causes, of which the secular Power never had any Cognizance, but through their Misrepresentations.

VIII. Their Testimony against Wars and Fighting; the Practice whereof, they judged inconsistent with those Precepts of Christ, Love your Enemies. Do Good to them that hate you. Wherefore they refused either to bear Arms themselves, or to hire others in their Stead. This exposed them to Fines, and Seizures of their Goods, and sometimes even to corporal Punishments at the arbitrary Wills of Military Officers.

These Points of their religious Dissent were to them of very great Weight and Consequence; in the Observance of which, they experienced an inward Peace and Tranquility of Mind, strengthening and enabling them to persevere in the Way of their Duties; and indeed their Patience and Constancy in enduring so great Fight of Afflictions, for the Sake of their religious Testimony, was a cogent and convincing a Demonstration of their Sincerity therein, as can reasonable be expected.

The Friends were indeeded made to suffer for their beliefs, as a review of the rtf file (above) will show. Here is a table showing the numbers of Friends in prison as of March 1684/85, taken from page xxxix of the Preface: 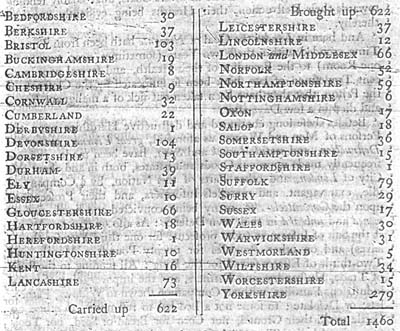 Link to my Quaker Practices and Beliefs page.