The History of the BFA

This association of Boone descendants and researchers was founded June 30, 1924. The first President, and organizer, was William Boone Douglass. Mrs. Hazel Atterbury Spraker, the author of The Boone Family, was the historian, registrar, and secretary of the organization. The BFA continued in existence until sometime in the late-1930s. The Association held special reunions, conventions, and trips in 1925, 1926, 1927*,1928, 1930, and 1932. A Convention scheduled for St. Louis in 1930 was cancelled because of the Depression. A planned meeting in Chicago in 1933 apparently didn't occur. I've prepared a list of these meetings in pdf format, with a brief abstract of the proceedings. The Association published an annual newsletter called The Boone Bulletin, which is available in a number of libraries, and through the Family History Library and its Family History Centers.

* This link takes you to the Digital Library of Appalachia and its extensive description of the 1927 trip the Association members took through the Cumberland Gap.

Photos thanks to the Genealogy and History Department, Seattle Public Library.

[Comment: Part of the incorporation document says that one purpose of the Association was to "preserve the purity of the Caucasian blood and to promote control and government by the Caucasian race." Membership was limited to those of "pure Caucasian blood." In this year (2008) it seems incredible that a respectable group of people could subscribe to such a purpose, or to restrict membership in that way. However, this document was written in the 1930s, a time when such thoughts were not unknown in this country and in Europe.]

Douglass also started an organization called The American Order of Pioneers on July 4, 1926. This organization had its first meeting on the July 4th holiday in Philadelphia at the Benjamin Franklin. Here is an abstract of what Douglass' wife, Allie Luckett Boone, said about that meeting:

This was the first meeting of the American Pioneers organization, in Commemoration of American Pioneers 1565-1726, held at the Benjamin Franklin hotel in Philadelphia. Officers were not elected due to a lack of a quorum of the directors.

Later, in about 1932-33, the two organizations were merged, and the Boone Bulletin became the newsletter for both.

The BFA was active in promoting projects related to the Boone family, including the placement of a mural of Daniel Boone in the U. S. Capitol, the establishment of Boone sites in Kentucky such as Fort Boonesborough, the election of Daniel Boone into the Hall of Fame at New York University, and the minting of a Daniel Boone commemorative half dollar. See a copy of the page about Daniel Boone from a publication of the Hall of Fame, which shows the bust of Boone done by sculptor Albin Polasek. The image below shows the medallion created for the Hall of Fame by C. Jennewein. Douglass and others in the BFA were also very interested in tracing their lineages back to English or European royalty, especially the De Bohuns. 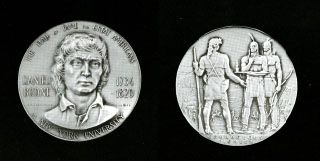 The Boone Family Association was greatly influenced by the energy and abilities of its founder, William Boone Douglass. As he grew older, and as sickness and age took their toll, the Association began to decline. After he died in 1947, the Association effectively ceased to exist. Here is what Hazel Spraker wrote about the situation:

"... our Boone Family Association which is now extinct because after our president, Mr. William Boone Douglass died there was no one with the time and energy to keep it going."

Source: A letter dated Nov. 4, 1955 from Mrs. Spraker to Mrs. Cyrus regarding John Boone.
The letter is part of the BFA materials at the Seattle Public Library.

Mrs. Spraker said much the same thing in a letter to a Mrs. Kimberly:

"The Boone Family Association is now inactive. When Mr. Douglass died July 7, 1949, no one else could be found who had the time and ability to carry on the work, which he had largely been carrying on alone. It just seemed too much for anyone else to undertake. I could not take it over because of poor health. So it just lapsed because of neglect.

There is some talk of reviving the Association, however. A Mr. Daniel Boone Allison, White-Henry-Stuart Building, Seattle, Wash. is interested in trying to put the Association on its feet again. If you are interested in helping to do so, he would be glad to hear from you. At least I assume that we could count on you to renew your membership. I can tell you nothing about the American Order of Pioneers, as I was never interested in it, and think the combining of the two societies was a mistake."

Directors of Other Nations

The Preservation of BFA Records

The papers of the Association, and some of William Boone Douglass' genealogical collection, were given to the Boone Family Association of Washington, and are now housed in the Seattle Public Library. See the announcement of the gift below:

Mrs. Spraker died on December 24, 1963 in Buffalo General Hospital, Buffalo, New York after a long illness Her husband, James Randolph Spraker, died in July, 1963. See a transcription of her obituary in pdf format. See also a modified register report for her and her family (pdf).

The death of Mrs. Spraker was announced to its subscribers in the Boone Scout of April 1964, page 131:

These working papers and records are now part of the Boone Family Association materials in the Seattle Public Library. This link will show an inventory of this contribution of Mrs. Spraker. There is also a name list of the people who wrote to her, or that she wrote to. Both links are to searchable pdf files.

This notice appeared in the July 1964 edition of the Boone Scout:

* Corrected to Edgar in a subsequent issue.

Thus, the records of the Boone Family Association are collected and preserved in one location, the Seattle Public Library, where they are all available for study and research. I've prepared a list of the donated BFA materials at SPL. I think that the Washington association was chosen as the repository in large part due to the relationship between Mrs. Buchanan and Mrs. Spraker.

I've made a list of the articles that were published in the Boone Bulletin, and am making it available in searchable pdf format. This list shows the name of each article, its author (if identified), and its volume, number, page, and date of publication. Further information is available by contacting me at this address: ahopkins@alum.mit.edu.

Go to the page about the Boone Scout, published by the Boone Family Association of Washington

Return to my Boone Family page.