The Centennial of Howard Hopkins' Birth

2007 is the centennial year of the birth of Howard Hopkins, who was born in Buffalo County, Nebraska on September 17th, 1907. In honor of this occasion, and of the man himself, I've assembled this new information about him and his life.

Dad was an avid gardener. When we first moved to Oklahoma and bought a house, Dad got one with a double lot. His garden took up half of one lot! He liked to try growing things that weren't usually grown in that climate, sometimes with success, sometimes not. He took extension courses in horticulture, and became very knowledgable. He liked to grow both vegetables and flowers, but it was the flower garden that got his special attention. He especially liked pinks and delphiniums, but he grew a variety of flowers. He continued active gardening until just a few months before his death. Here are a couple of photos he took of his flowers.

He also loved gooseberries, and always had a gooseberry patch in his garden. He made preserves and pies from them, and loved introducing other people to the delights of eating gooseberries.

Dad was a talented painter of Western scenes, especially if they involved cactus. He painted over 140 pictures in his lifetime, most of them in his retirement years. Several of them are shown elsewhere on this site, but here are a few that are new scans for this page.

Dad was a research chemist, and worked for much of his life for the Skelly Oil Company. He loved chemistry. He told me he decided early in college on that major, although he did like geology, too. He was an inventive man. He kept notebooks of his ideas for things to try, to experiment on. Some of these turned out to be marketable products. He was awarded four patents, which are listed below.

Dad had a quality that's common in inventive people: he had imagination. His notebooks are full of ideas. He often woke up at night and wrote a note to himself about something he had thought of. He continued to be interested in chemistry after his retirement, and often wished he could have continued working longer. I think he turned his inventive mind to painting after he was no longer able to work as a chemist.

Dad went to high school and college at Berea Academy and Berea College. He majored in chemistry, which he said is the only thing he ever considered making a career in. Here is a photo of him with the college track team, of which he was a member. 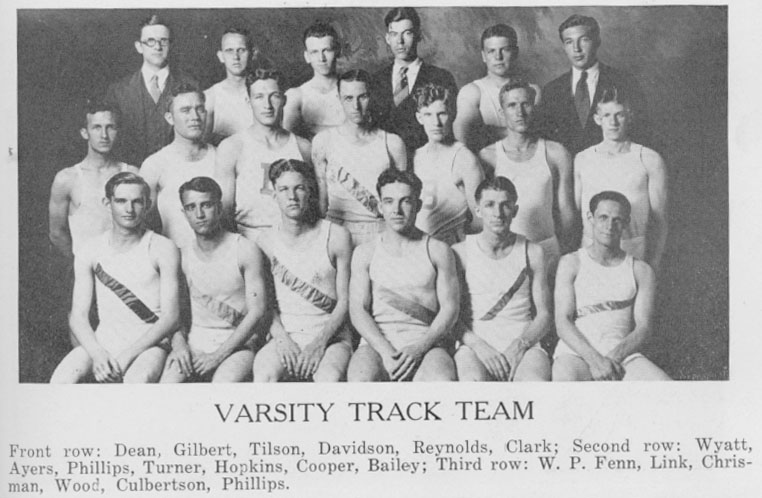 After Dad graduated in 1930, he found a job at the Champion Paper Company in Hamilton, Ohio. It was there that he met my Mother, Thelma Wolf, who was a friend of Jeaneace Beckett, who married my Uncle Don. They were married, and I was born in Hamilton in 1936. Dad had a folding Kodak camera, which he liked to use for indoor photography, using bright lamps. The blue tint of the third picture came from using a blue print machine to make the copies.

Dad liked writing poems. He wrote and submitted jingles for the Burma Shave signs that used to line the highways. He also wrote poems about the people he worked with, his family, and friends. Some of his poems were somewhat philosophical, but he preferred the humorous and down to earth. Here are a few examples from his collection:

Dad was a Republican. When I once asked him why, he said he was a Republican because of Abraham Lincoln. Lincoln was one of his heroes. He considered himself a conservative, but his brand of conservatism bore no relation to the kind you hear so much about today. I would classify him as a Nelson Rockefeller Republican. He was one of those vanishing breed, a moderate Republican. He was conservative regarding finance and international affairs, but was moderate regarding social policy and economics. I'm glad he didn't live to see what the Republican Party has become.

He and I often had spirited discussions about politics. I've come to appreciate his point of view more as I've grown older. He exemplified the politics of hope and opportunity. He distrusted the radical, both left and right, and, as he says in his poem above, aimed for the middle. The Golden Mean was for him a guiding principle.

Dad was brought up in the Baptist church, his mother being a strong Baptist and having been adopted and raised by a Baptist minister. After graduating from Berea College, he didn't attend church services for several years. Chapel attendance was mandatory at Berea, and he told me he'd had enough of it there to last him a long time. Eventually he joined a Congregational church, later transferring to a Presbyterian church after we moved to Oklahoma. He served as an elder in that church, taught a Sunday school class, and sang in the choir.

Later in his life, he switched to the Baptist church again, which was the church his second wife was brought up in. He belonged to the South Tulsa Baptist Church, and attended services and the seniors Sunday school class there. He enjoyed that class, and sometimes taught the lesson. He told me the discussions were sometimes very interesting to him, even though (or maybe because) they were sometimes pretty spirited. He was known by his class because of his paintings, his tolerance and good nature, for his love of gooseberries, and for the gooseberry pies he sometimes brought to church dinners.

He told me once that he didn't consider himself a religious man, but he had a very strong moral and ethical sense. He practiced the Golden Rule in his dealings with people. I can hardly remember any times when he had anything bad to say about anyone. He was optimistic by nature, and always thought other people would treat him as well as he treated them. He was often right.

My father was a good man, and well-liked and respected by those who knew him. He's a role model for me, someone I can strive to be like, although I know I will never be as good a man as he was.

He would have been uncomfortable reading this. He was a modest man, and a humble one. But he was a real gentleman, as many people who knew him would attest. This page is a tribute to him, and to the kind of father he was to me.

See also this page of his paintings.

Read some of his writings.